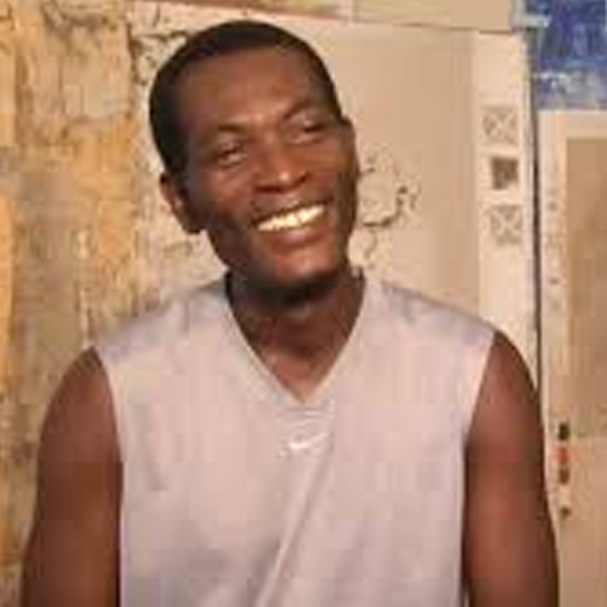 The accountant who, realized that he would never be fully happy in this profession and diverted to art, after many years was born in 1966 in Accra, Ghana. He spent most of his childhood in Togo, went to school in Togo, Benin and Ghana where he was trained in accounting. In 1996, he became a professional full-time painter, a moment in which his “heart went stable”. Over fifteen years later Gabriel Eklou cannot imagine his life to be any different.

Gabriel’s work depict symbolic imagery of Ghana’s cultural heritage and rearrange them in earth-coloured compositions with characteristically shaped figures, tall, thin and stretched. When those tall people graciously sit, stand or move in a typical African landscape or urban scenery depicted in light earthy tones, they embody a refreshingly new expression of what represents and constitutes African daily life.

Most of his works often show Adinkra symbols, those ancient Akan visual symbols which have a long tradition in Ghanaian culture and which are used to express concepts and aspects of daily life and to convey traditional wisdom. They are a part of the dialectic contrast appearing in Gabriel Eklou’s pictures between an ancestral African symbolism and a portrayal of daily Ghanaian life in a very modern uniquely personal visual style.

He is proud to be called an African artist. Different from some contemporary artists who emphasize their geographical autonomy, Gabriel Eklou calls Africa the beginning and the base of his artistic work. Africa has been the inspiration of many artists in the world, but he belongs to the few who can rightfully call the African continent the source and ground of their life as an artist, as Gabriel Eklou is a contemporary visual artist working and based in Ghana.