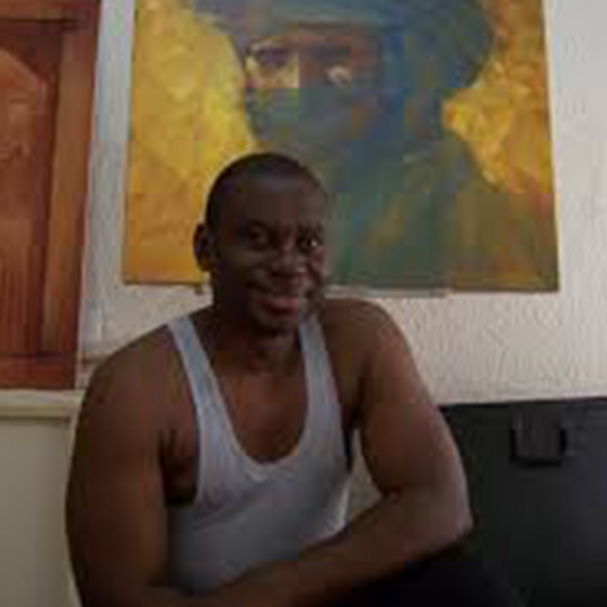 The artist who considers himself as ‘an artist without borders’, graduated from the Kumasi School of Fine Arts in 1982 after which he taught at that school for three years before deciding to pursue his career as an artist. Born in 1957 in a forest region in eastern Ghana and at the age of ten years old he moved to the savannah region in northeast of Ghana. The two types of geographical regions in which he has lived have given him very different perspectives of life, which are now reflected in his work.

Initially Chrison was greatly influenced in the figurative style of painting by the renowned Ghanaian artist, Ato Delaquis, who had been his professor and mentor, Delaquis’ brother, a sculptor, also influenced Chrison in cubism and traditional African art styles.

Chrison started out painting in oil but when he moved to Côte d’Ivoire in 1990 he began experimenting with watercolour. His paintings of the old Ivorian capital, Grand Bassam, were such a success that he continued to use watercolour for some time. He later switched back to oil painting and currently paints almost exclusively in oil. His work has been exhibited in individual and group exhibitions in Ghana, Côte d’Ivoire and England and can be found in private collections in such parts of the world as the US, Europe and Africa.

Chrison’s knowledge of various styles and techniques of painting permits him a great deal of freedom in expressing what inspires him, thus carving for himself the title “an artist without borders” .His inspiration are traditional African art, especially when he paints people or images that relate directly to the African tradition. He loves to travel to obtain natural, original vibrations of being close to nature – whether it is in the desert or game parks with wild animals.

He admits, however, that because of his mother’s very positive influence in his life, he is very much inspired by women and they consequently feature prominently in the vast majority of his paintings.