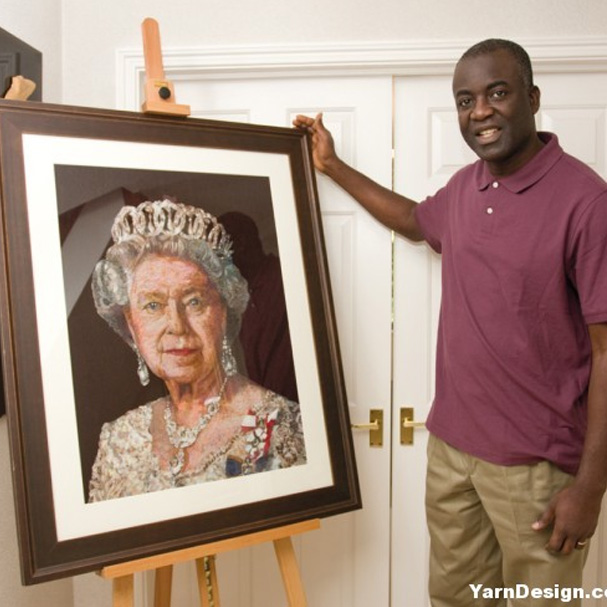 He was born in Ghana in July 1957. Graduating in Architecture from the University of Science and Technology Kumasi in 1986, Obuobi migrated to Canada to practice architecture whilst simultaneously developing his work as an artist. He experimented with different media, eliding conventional modes of form, shape, colour and texture to create an inimitable medium that paradoxically reverberates with traditional artisanal forms, yet exudes a contemporary vitality; a medium connecting the past to the present and progressing to a (re)imagined future.

His first solo work, ‘Sankofa’ was exhibited at the British Council in Accra where it provoked deep thought and attention among Ghana’s political classes. From here, underpinned with integrity and ancestral respect, his work has gone from strength to strength, with a series of exhibitions, including 2008’s The Phantom of the African Beat, at Washington DC’s International Visions Gallery and a portraits of HM Queen Elizabeth II and HRH the Duchess of Cambridge received at the Buckingham Palace and Clarence House after meeting Prince Charles.

The Yarn Collage Technique is a new art medium created by Ghanaian artist Yaw Obuobi. He moves his paintings from being done with paint and brush, to the gluing of lines of yarn to attain the detailed artistic effects which are usually achieved the brush strokes. His artwork has been exhibited in Africa, Europe, the Middle East and North America. He was recently featured at the 2012 Ideal Home Show, where he presented a portrait of the Queen to Prince Charles.

Subscribe and stay up to date with news, updates, upcoming exhibitions and more.