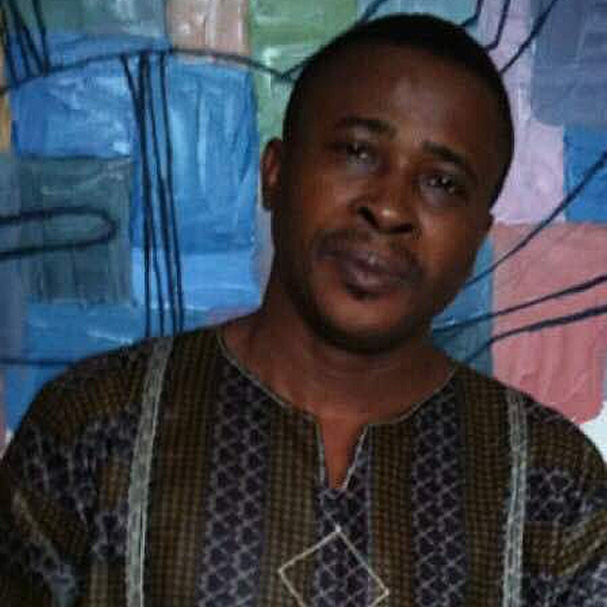 Born on the 8th of September 1964. His artistic potential was already evident while at school, winning 1st prize on several occasions .He obtained, The National Certificate of Education in 1983-1986, qualifying him for admission into The Ahmadu Bello University, Zaria, where he graduated in 1989 with a Bachelor’s degree in Fine Art. He specializes in sculpture and was hailed the best sculptor student among his peers, but has practiced principally as a painter in his professional career.

His works are beautifully rendered, favouring a compositional approach that strives on simplicity. With hard, curved and fine lines, his figures are daftly outlined in an effortless manner. The artist continuously moves the tip of his brush on to the canvas, a process that probably requires thought-out form from intuition rather than making elementary sketch before building up the final form with his oil. It follows that Momoh engages his canvas directly, without formal guideline, to depict his figures. By creating distorted images almost with childish lingua.

Momoh deliberately exaggerates his forms alluding human shape even though they are portrayed in a graceful and elongated way. This throws emphasis on how the element of line plays an important role in his art. Its reliance brings his work to reflect drawing on one part and painting on a brighter plane. While line is used to outline the form, the out spread of colour heightens the form into a more concrete reference.

His characters comprise three major different types of figuration, though he does not follow this pattern regularly. Common are his feminine characters depicted with half upper limb followed by his reclining or seated characters with long thin and hands, either with objects of calabash beside them or playing ‘shekere’ to small group of dancers, and then the figures depicted with square torso only re-enforces his painterly approach in relation to the visual interpretation of figures on canvas.
His works are widely exhibited within and outside Nigeria. He lives and works in Lagos.